USC prides itself on being a residential community, where most undergraduate students live on or near campus. On- and off- campus cafés, restaurants, and dining halls offer meal options from kosher to vegetarian, buffet-style and grab-and-go snacks. 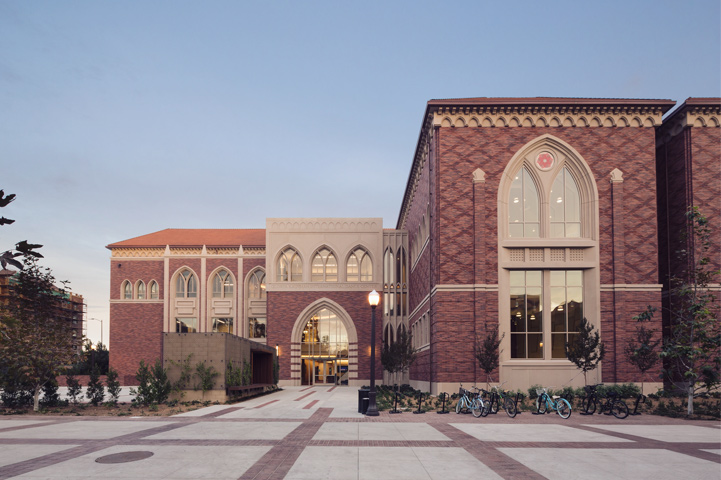 Fertitta Hall
In September 2016, this addition opened as the new home for undergraduate business programs in the Marshall School of Business. It significantly expands student space with 20 new classrooms, 50 state-of-the-art breakout rooms, a lounge, a café and outdoor seating.
Doheny Memorial Library
Built in 1930 to honor USC alumnus and trustee Edward Doheny Jr., the library houses a vast collection of books and journals. It also includes numerous study spaces, the East Asian Library, the Cinematic Arts Library, the Music Library and Special Collections.
Widney Alumni House
Constructed in 1880, the Widney Alumni House was USC’s first structure, housing classrooms for the university’s 53 students and 10 faculty. It has changed locations four times in its history and has been designated a historic monument by the state of California. As its name suggests, it now serves as one of the offices for the USC Alumni Association.
Trojan Shrine (&amp;quot;Tommy Trojan&amp;quot;)
Unveiled in celebration of USC’s 50th anniversary, the Trojan Shrine was sculpted by Roger Noble Burnham and embodies the traits of an ideal Trojan: FAITHFUL, SCHOLARLY, SKILLFUL, COURAGEOUS, and AMBITIOUS. Tommy performs a feat that is physically impossible in real life: flexing every muscle in his body at once.
Traveler
Located across Hahn Plaza from Tommy Trojan, this bronze statue was unveiled in 2010 as a gift from former USC president Steven Sample and his wife Kathryn. The statue is modeled after the iconic Trojan mascot, a white Andalusian horse, who made his first appearance at a USC football game in 1961.
Ronald Tutor Campus Center
Since 2010, the Tutor Campus Center has become the primary gathering place for students, staff, alumni and visitors at USC. Its central courtyard, known as the International Plaza, makes an ideal place to eat, study, or just relax with friends. Visitors can find the Admission Center on the second floor of Steven and Kathryn Sample Hall.
Bovard Administration Building &amp;amp; Auditorium
Named for USC’s fourth president, George Finley Bovard, the Bovard Administration Building and Auditorium were built in the Northern Italian Renaissance style of architecture and completed for all of $587,000. Bovard Auditorium remains one of the oldest stage facilities still operating in Los Angeles.
Wallis Annenberg Hall
Home to the The USC Annenberg School for Communication and Journalism, the Wallis Annenberg Hall was designed with the input of students, faculty and staff. The physical spaces and digital networks comprise a learning and production laboratory unique to an academic environment — a place where students and scholars can be nimble and innovative as they work collaboratively.
Health Sciences Campus
Located seven miles northeast of USC’s University Park Campus, the 79-acre Health Sciences Campus is home to the state-of-the-art Keck Medical Center of USC, as well as the Keck School of Medicine and the USC School of Pharmacy.
Alumni Park
Alumni Park serves as the setting for numerous events throughout the year, including USC’s Commencement exercises each May. You can find Alumni Park on the west side of Doheny Library.
Fisher Museum of Art
Established in 1939 by Elizabeth Holmes Fisher, the Fisher Museum was the first museum in Los Angeles devoted exclusively to fine art. The collection contains some 1,800 objects spanning five centuries. The museum can be found on the University Park Campus on Exposition Boulevard, directly across from Exposition Park.
McCarthy Quad
This broad expanse of lawn has become a center for student activities. Throughout the academic year, look for concerts and other student events. You will also find the Wednesday Farmers Market, offering locally sourced produce, arts and crafts, and samplings from area restaurants.
Glorya Kaufman International Dance Center
As the home of the Kaufman School of Dance, the 54,000 square-foot Dance Center provides state-of-the-art rehearsal and performance spaces, a training and fitness zone, as well as classroom and office spaces for USC’s newest performing arts school.
Gwynn Wilson Student Union
Opened in 1928, the Student Union houses the USC Ticket Office, the University Park Campus Pharmacy, and the USC Kortschak Center for Learning and Creativity, as well as other campus and student services. Its exterior carvings feature whimsical depictions of campus life.
USC Founders Park
Situated to the north of the Bovard Administration Building, this park provides lush green space for studying or simply relaxing.

From engineering programs that promote the design and development of “green” technologies, to our rideshare and commuter services, to healthy dining options, USC remains committed to the environment and sustainability.